This guest post comes from Amanda Peyton, the cofounder of MessageParty, an early-stage mobile startup based in New York City.
YouTube phenomenon Dave Days brings teenage girls to tears in the same way Justin Bieber does. While he’s not actually a mainstream celebrity, I think he’s the best example of the new media movement toward “person as distribution channel” – a developing trend that has very interesting and potentially significant implications in the world of content distribution.


At the beginning of May, I attended a live-in-concert gathering of YouTube celebrities called the Digitour. I forget exactly why I went, but keep in mind the average age of the audience was about 16 (on a Sunday!). I had no idea who any of the performers were except for the Gregory Brothers, because, come on, everyone saw “Bed Intruders.”

It was at this event that I discovered Dave Days. It was quite bizarre to watch the massive crowd of teenage girls gather in front of the stage and sing along to every single word.  After all, he wasn’t famous.

…or was he? After a little research on Dave and his internetting, I realized that if “celebrity” is some combination of influence and reach, Dave Days was doing better than most movie stars. His YouTube page has a cumulative view count of over 270 million, more than mainstream uber-pop-stars like Ke$ha.

The weird part is that he is not famous in the way that we traditionally define fame.  His Wikipedia page was deleted on June 10 because apparently he’s not significant enough. And according to his YouTube page, he’s unsigned.

What he does have, though, is an enviable distribution network that he has (mostly) complete control over. The network was built from scratch starting with YouTube and now spans Twitter, Facebook, DailyBooth, and MySpace.

What I mean by “Person as Distribution Channel” is that, with the rising popularity of social platforms, we are moving in a direction where a specific person can have as much impact distributing a piece of content as a more established network.  I don’t think we are there yet as many of the platforms are still quite nascent – but it’s definitely up for debate.

Remember, the cost of distributing a piece of content digitally is now close to zero. You can post a video or an article or a photo through a plethroa of free services. The cost is in building the audience/fan base.  Pre-internet (and pre-social platforms), all the barriers were at the entry point — starting a television station or a radio station or a magazine was a pain in the ass, but once you had gone through the process, there wasn’t that much competition on the other side.

Now it is super easy to set up a “channel” for media. The hard part is differentiating yourself and gathering the people who are actually interested in whatever it is you are putting out there.  This takes much longer because there’s so much competition. The whole “I have nothing to watch” ailment is all but eradicated. Instead, the problem is “I don’t know what’s good” – and with that comes a precipitous rise in what internet people call FOMO, or “fear of missing out.”

The other interesting shift is that “launching” a piece of content doesn’t really mean anything. When Dave Days posted his first video, I am sure probably about 200 people watched it.  That no longer means that you are talentless and should stop making videos, it simply means that you need to spend more time creating and experimenting with different audiences. Additionally, you have no idea WHEN people are actually going to find or encounter your content. It could have flat views for months, get posted to the right message board or blog, and then all of a sudden blow up (see: “Boxxy”). The process of building up organic inbound links and embeds takes time as well.  But when people do end up in Dave Days’ universe, they most likely aren’t watching just a single video – they will go through and drive up the view counts of several, so in a way each new viewer can have exponential impact if you have lots of content.

I should mention the web series “The Guild” here. They went through the same process of building an audience organically over time, slowly building up a network across many sites and pushing content through all those channels.  Because they put in the time to build up the audience, they are in the powerful position of owning all the intellectual property for the show and not having to answer to a studio.

Another data point is littlemonsters.com – the as-yet unreleased social network that Lady Gaga is building. Forward-thinking celebrities are beginning to realize the power of truly “owning” their fans/audiences and building web products that give them a channel where they *really* have absolute distribution control.

After a totally fascinating experience at the Digitour, I spent a few hours analyzing Dave Days and his various profiles across the internet.  Here’s the narrative I pieced together, some of which may or may not be accurate.

He started by putting out a mix of pop-punk cover songs, comedy and videos about his obsession with Miley Cyrus. In several videos, he sings to a cardboard cut-out of the pop star. The quality of the videos is just above-average-enough that they stand out among the other webcam-on-my-desk videos that teenagers like LonelyGirl15 were famous for.

People liked these videos so he made more of them.  And then the key move – he did a very good job encouraging his new fans to subscribe to his YouTube channel and check out his profiles all around the social web. So if you liked these videos (and what’s not to like?) you could ALSO follow on Twitter, like on Facebook, follow on DailyBooth and whatever it is that people do on MySpace these days. 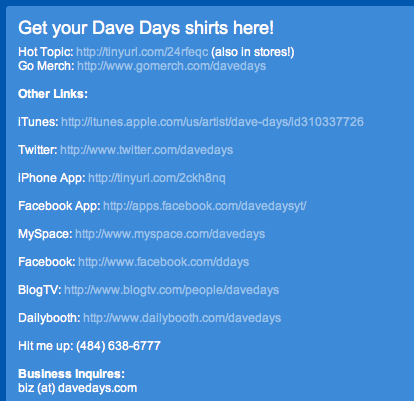 He racked up so many views and fans that eventually the REAL Miley actually appeared in one of his videos.  It took over 3 years (first video was 2007), but Dave Days had “made it.”  Today he has nearly 1.5 million subscribers on YouTube, over 170,000 Twitter followers, 232,000 Facebook fans, 62,000 DailyBooth followers, an iPhone app, and a Facebook app. The channels and the audience are starting to yield some revenue, too. A video he did for Pop Tarts is up to 280,000 views, and he’s pushing merchandise like t-shirts on his YouTube page.

And like a smart social media creator, throughout the Digitour he was videotaping the event from the stage (how meta) so that he could post the video for his loyal fans. Volume does play a role, because creators never really know what is going to be a hit and to what degree – put another way, there’s a big difference between 200,000 views and 2 million though both could be considered successful.

Now our friend Dave is at the point where he has so many channels that when he releases a new video, he can guarantee a view count in at least the tens of thousands straight away. And because of the strength of his fanbase and social networks, he’s at #10 on Billboard’s “Uncharted” this week.  Although it has been four years, he has constructed his own distribution network that is rising in power and popularity.

If the future is people not only as talent and creators, but as distribution channels that they own and control, it’s an incredibly powerful thing for content creators who have the patience and the know-how to build these networks. Additionally, there’s a big difference between a person and a brand distributing content. While I don’t think we’re at the point yet where there are *enough* people like Dave Days and Lady Gaga and Ashton Kutcher to really be able to analyze what it means for brands and established networks, it’s certainly a very interesting trend to watch.

And my teenybopper cred officially went up.  SWEET.